RSHO-K™ is formulated with ImmunAg™, a patent pending Kriya brand Humulus extract. Less than a decade ago, a team of doctors and scientists discovered an alternative source of CBD in the jungles of India. Then, they selectively bred the plants to create a potent CBD oil extract.
Real Scientific Hemp Oil®
Browse All
WHAT IS REAL SCIENTIFIC HEMP OIL? 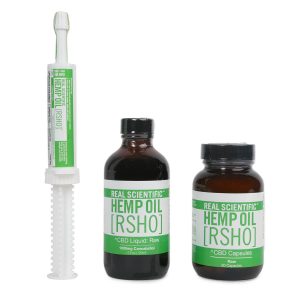 BLUE LABEL
The same base CBD hemp oil as our Green Label, the Blue Label hemp oil has been put through an additional decarboxylation step—heating the oil slightly to change the molecular structure of the oil’s cannabinoids, which transforms the plant’s CBDa to CBD. With a CBD content of around 17%, depending on the batch, RSHO™ Blue Label oil is an excellent source of CBD, without sacrificing the chlorophyll and many vitamins, minerals, and amino acids present in our unfiltered oil. Blue Label RSHO™ is our mid-priced product, maximizing CBD content while retaining the hemp plant’s natural composition. 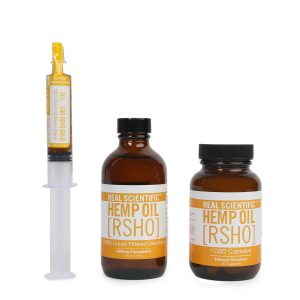 GOLD LABEL
Similar to our Blue Label oil, our Gold Label RSHO™ has been decarboxylated to modify its natural CBDa to CBD. Additionally, our Gold Label RSHO™ is put through an extra filtration process to remove the hemp plant’s excess waxes, chlorophyll, and other plant material. This purification stage refines our oil to a golden color, removing much of our Green and Blue Label’s “green” chlorophyll taste. This process also makes our Gold Label oil the most potent of our products, maximizing the CBD content to approximately 24% per batch. 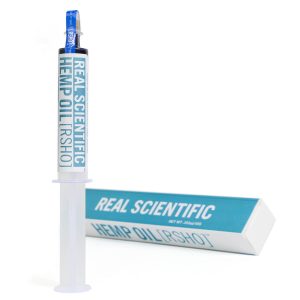 SPECIAL BLEND
RSHO™ Special Blend combines high concentration decarboxylated oils into a single product, allowing the user to receive high levels of CBD in a single supplement. Special Blend packs 190 mg of CBD into every serving, making it far and above the highest potency product we have in our store at 3800 mg of CBD per 10 g tube.

WHAT ARE THE BENEFITS OF REAL SCIENTIFIC HEMP OIL?

There are many benefits to taking a daily serving of CBD from hemp oil products, but the most exciting among them is that a CBD oil supplement helps augment the body’s naturally occurring endocannabinoids. This helps the body’s ability to promote homeostasis within its systems.

Cannabinoids are a class of active chemical compounds produced by the cannabis plant. At present, there are over 100 discovered cannabinoids that are largely responsible for the effects cannabis has on the body. Common cannabinoids include tetrahydrocannabinol (THC), cannabidiol (CBD), cannabinol (CBN), and cannabigerol (CBG). Cannabinoids work together with the body’s endocannabinoid system to regulate the body’s natural functions—including mood, sleep, appetite, and immune response—to help create a balance in our systems.

However, a hemp oil supplement offers more than just cannabinoids such as CBD. Hemp oil also provides the body with a number of essential nutrients, such as vitamins and minerals, omega fatty acids, proteins, flavonoids, and terpenes. Gaining these nutrients, which are often missing from our modern diets, is just one more benefit to adding a hemp oil supplement to your diet.

The main—and sometimes only—ingredient in RSHO™ is pure hemp oil. Unlike isolated or synthetic cannabinoids, full-spectrum hemp oil refers to pure hemp oil that features all the same cannabinoids present in the original hemp plant, providing an all-natural CBD hemp oil supplement that allows the cannabinoids to work together in what is called the “entourage effect”.

However, it is not just the cannabinoids that make our CBD hemp oil a valuable addition to your complete diet. Hemp oil also contains many essential vitamins and minerals such as fatty acids, fiber, protein, chlorophyll, flavonoids, and terpenes, which makes it a beneficial ingredient to add to any diet.

Although there are trace amounts of a number of cannabinoids in hemp, the primary compounds are cannabidiolic acid (CBDa) and cannabidiol (CBD). CBDa is more abundant in live hemp than CBD, and to get high levels of CBD in hemp oil products, raw hemp oil must be decarboxylated in a process that heats the oil, changing CBDa into CBD. Both CBDa and CBD have been shown to possess a range of benefits through their interaction with the body’s native endocannabinoid system.

When viewed as a complete dietary supplement, we begin to see the value of hemp oil as an ingredient in our supplements beyond being a source of CBD. The cannabinoids in hemp oil work together in the entourage effect to stimulate the endocannabinoid system and provide balancing effects, while the many nutrients present supplement our deficient modern diets.

Vitamins such as vitamin A, B, C, and E are critical to the health of our bodies and the correct functioning of our systems and organs, while minerals such as magnesium, iron, potassium, and zinc play an important role in immune function, bone health, metabolism, and oxygen use. Omega fatty acids also play an essential role in the overall health of the human body, as does a diet high in fiber.

The recipes for RSHO™ hemp oil products, such as our capsules and salves, also contain herbal ingredients like turmeric root and white willow bark, as well as other all-natural ingredients such as beeswax and almond oil.

HOW TO USE REAL SCIENTIFIC HEMP OIL

RSHO™ pure hemp oil from the oral applicator can be dispensed onto a butter knife or spoon and placed under the tongue. Hold for 60 to 90 seconds. The oil can then be swallowed.

Similarly, RSHO™ tinctures and liquids can be taken orally and held under the tongue for a minute or more before swallowing. They can also be mixed with your favorite food or beverage.

RSHO™ capsules can be taken orally once or twice daily.

RSHO™ salve can be applied externally by massaging liberally into the skin, muscles, and joints throughout the day.

Because hemp is an efficient bioaccumulator, it is important for us to avoid using chemical fertilizers, herbicides, and pesticides that can cause residual contamination of our products. To protect our customers, we grow all of our hemp without the use of chemicals that may compromise the integrity of our products and cause negative side effects.

To extract our CBD oil from our hemp crops, we use supercritical CO2 in a process that the FDA considers GRAS, or “generally regarded as safe”. Because we use a nontoxic solvent, the risk of contaminating our CBD oil is removed.

Our commitment to product quality and purity has driven HempMeds® to develop the strictest testing process in our industry, the Triple Lab Tested™ standard. We use ISO/IEC 17025:2005 accredited testing labs to examine our hemp oil and assure both its safety and consistency. By testing our hemp oil three times during our process, we ensure that our products are completely safe for use by you and your entire family.

RSHO™ has no serious negative side effects, and CBD oil products will not get you high. When CBD oil is derived from hemp as it is in RSHO™ products, it alone cannot produce psychoactive side effects since CBD hemp oil contains only trace levels of THC—far too little to be psychoactive at suggested serving sizes, even in our most concentrated products.

WHEN CAN I EXPECT RESULTS?

It can take a couple of minutes to a couple of hours after use for results to fully appear, depending on serving size and method of application, among other factors that affect the rate of absorption by the body.

Although our customers often report noticing results as early as their first serving of CBD hemp oil, CBD, like all cannabinoids, can build up in the body and cause an increase in cannabinoid receptors, making the endocannabinoid system more active and more sensitive to stimulation by cannabinoids.

We recommend completing your entire RSHO™ product (usually 30–60 days) before deciding to discontinue your CBD oil supplement routine to give the CBD and other cannabinoids time to build up in your system for full results. 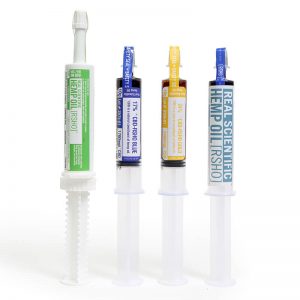 RSHO™ PURE CBD HEMP OIL
The purest form of CBD hemp oil available in our products, pure RSHO™ hemp oil is also the most potent of our products. Green Label RSHO™ contains 50 mg of CBD per serving, the Blue Label has 85 mg, and our purified Gold Label RSHO™ tops out with 120 mg of CBD per serving. We also offer RSHO™ Special Blend, which contains 190 mg of CBD per half-gram serving—the highest of our CBD supplements. RSHO™ pure hemp oil is the choice for customers looking to integrate the highest concentration of CBD into their diet.

Our thick, viscous hemp oil contains high levels of CBD and a number of essential vitamins, minerals, and fatty acids and it needs to be kept in the fridge to ensure freshness. To simplify the process of measuring serving sizes, RSHO™ comes in an easy-to-measure applicator. When taking RSHO™, the oil can be pressed from the oral applicator onto a butter knife or finger and placed under the tongue. 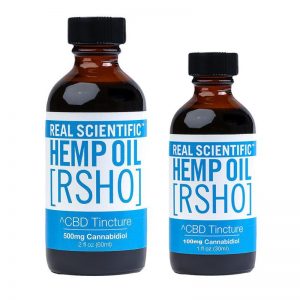 RSHO TINCTURE
While our RSHO™ hemp oil is our most potent product, our hemp oil tinctures contain the lowest concentration of CBD per serving (4 mg–10.5 mg). RSHO™ tinctures also have the lowest price point ($29 for the 1 oz bottle) of our CBD hemp oil products. This combination makes them an excellent choice for beginners or those looking for minimal daily CBD levels.

Our RSHO™ tincture combines Blue Label RSHO™ hemp oil with medium chain triglyceride (MCT) oil derived from sustainably sourced palm oil and organic coconut oil. RSHO™ tincture is held under the tongue for a minute or more before being swallowed for sublingual absorption of the tincture. RSHO™ tincture tucks easily into the medicine cabinet without drawing attention to itself, and the small size of the bottles makes travelling with them a snap. 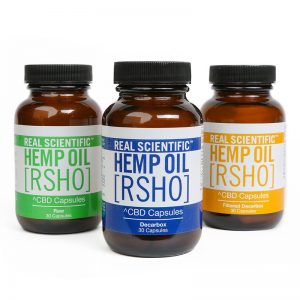 RSHO CAPSULES
The full benefits of all three RSHO™ labels are now available in convenient-to-take capsules. All three labels (Green, Blue, and Gold) contain the same 25 mg of CBD per serving, plus 200 mg of calcium and 200 mg of our proprietary blend of white willow bark and turmeric root. The vegan, delayed-release capsules ensure consistent absorption over time.

With no question of serving size and no need to measure servings, these capsules are exceptionally easy to use every day and are perfect for our customers who are always on the go, as is so often the case in today’s world. To get your daily serving of CBD, all you need is a glass of water.

RSHO LIQUID
Our newest RSHO™ product,  RSHO™ liquid presents a middle ground between our low-CBD tinctures and our high-CBD RSHO™ oil. Available in all three label colors, there are 31 mg of CBD per suggested serving and 1000 mg of CBD per bottle.

Similar to our RSHO™ tincture, RSHO™ liquid combines RSHO™ hemp oil with medium chain triglyceride (MCT) oil sourced from sustainably cultivated palm oil and organic coconut oil. RSHO™ liquid can be taken alone or added to almost any food or drink for a wholesome and nutritious way to get your vitamins, minerals, and CBD, too.